It is a pretty well-known fact that space manufacturers and design engineers spend countless hours testing critical components in their launch vehicle systems such as cryogenic applications where leakage rate remains one of the most challenging and dangerous elements. If the leakage rate becomes too high, this can cause catastrophic failure. This is the reason rocket sealing solutions, especially those used in tanks and feedlines, must meet very stringent specifications. Aside from leakage rate, it is important to note that cryogenic systems are subject to other performance stressing factors that must also be considered in order to secure a well-balanced solution. Weight of the hardware and ease of installation are two other important factors to be discussed, both of which depend on the compression force required to compress the seal during assembly. Other factors, such as spring back after deflections and the ability to perform in dynamic applications, are other critical criteria that can increase the performance life of a seal. One must also consider cycling to high temperature or high pressure, chemical compatibility and need of non-circular shapes when choosing the best sealing technology for a specific application.

If you switch from a metal seal with high compression forces to an Omniseal® RACO® spring-energized seal, it can save up to 88 kg per rocket in bolts alone. Considering the additional cost per kilogram for a rocket launch or landing, this can make the difference in hardware weight and eventual cost-savings. Omniseal® RACO® solutions also provide higher spring back rates after large deflections caused by the typical forces a rocket system experiences. This makes the seal more reliable, especially after repeated use, which is the direction of future space exploration.

On the other hand, there are factors leaning toward metal seal solutions in conditions of cycling to high temperature or pressure where polymer spring-energized seals have intrinsic limitations. These include chemical compatibility as well. The ability to be compatible with almost all chemicals and fluids used in the space industry is one of the benefits provided when using a plated metal seal.

For a rocket’s journey into space, it most often requires various cryogenic tanks to house the rocket fuel components, which can include liquid forms of oxygen, hydrogen, nitrogen and methane as well as gaseous helium and others. As the tanks are huge in size, they require seals that are equally large in size - typically between one and two meters or even larger. Sealing is extremely important especially when liquid oxygen or hydrogen are involved since they are easily ignitable, with seals having to withstand the forces caused historically by take-off but now during landing as well. The tank seals are critical to operation as they stop fuel leakage which can cause critical failure and in some cases, loss of life. This is why space vehicle manufacturers justifiably put stringent specifications on seals. 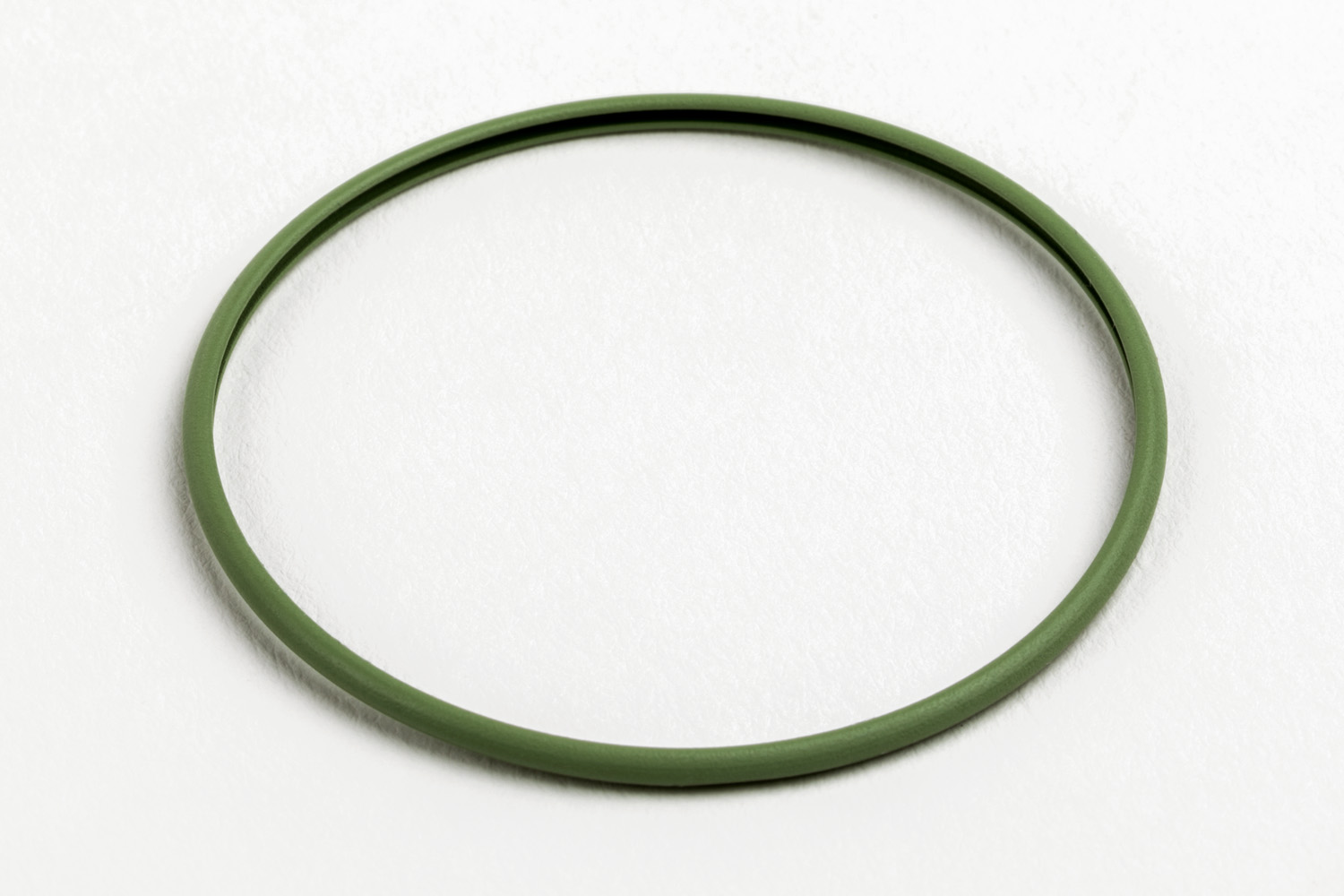 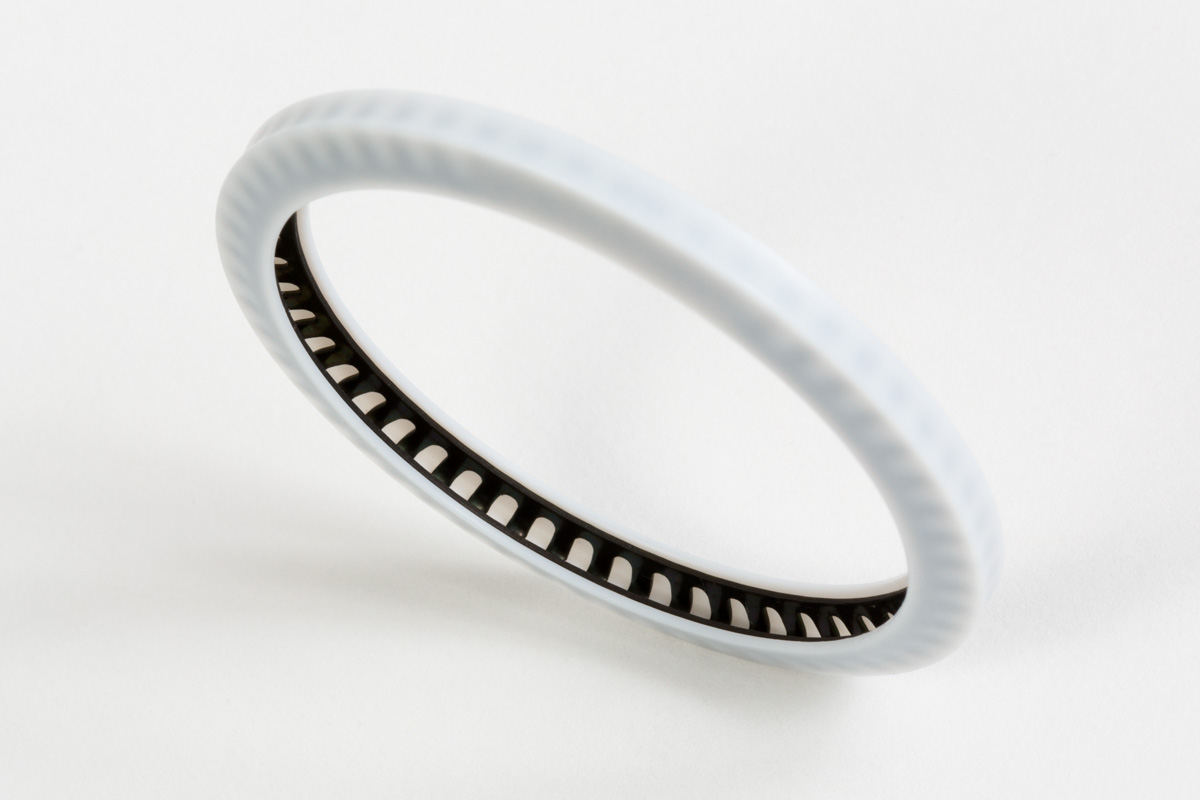 Leakage rate is often the number one factor in selection of a cryogenic tank seal because the seal is used to perform this main function. Requirements are very challenging, typically expressed in sccs (standard cubic centimeters per second) and in a range from 10-6 to 10-10. When extreme leakage performance is required during qualification testing at cryogenic temperatures, there is no better option than Omniseal Solutions™ metal spring-energized seal (Figure 1). This technology has a proven pedigree in cryogenic applications, especially within the space industry.

If different type of seals can satisfy leakage rate specification, how do you select the best fit for your cryogenic application? You must consider other critical factors that can affect the performance of the seal without compromising leakage rate. For example, if the leakage requirement is in the range of 0.001 sccs, Omniseal® RACO® spring-energized seal (see Figure 2) is a proven solution and has been qualified in many NASA space programs for the past 60 years, becoming a valid alternative to metal spring-energized seals.

One disadvantage of metal seals is the force required to compress the seal. Figure 3 shows an example of load/compression curves for both Omniseal® RACO® spring-energized and two alternative metal seals. 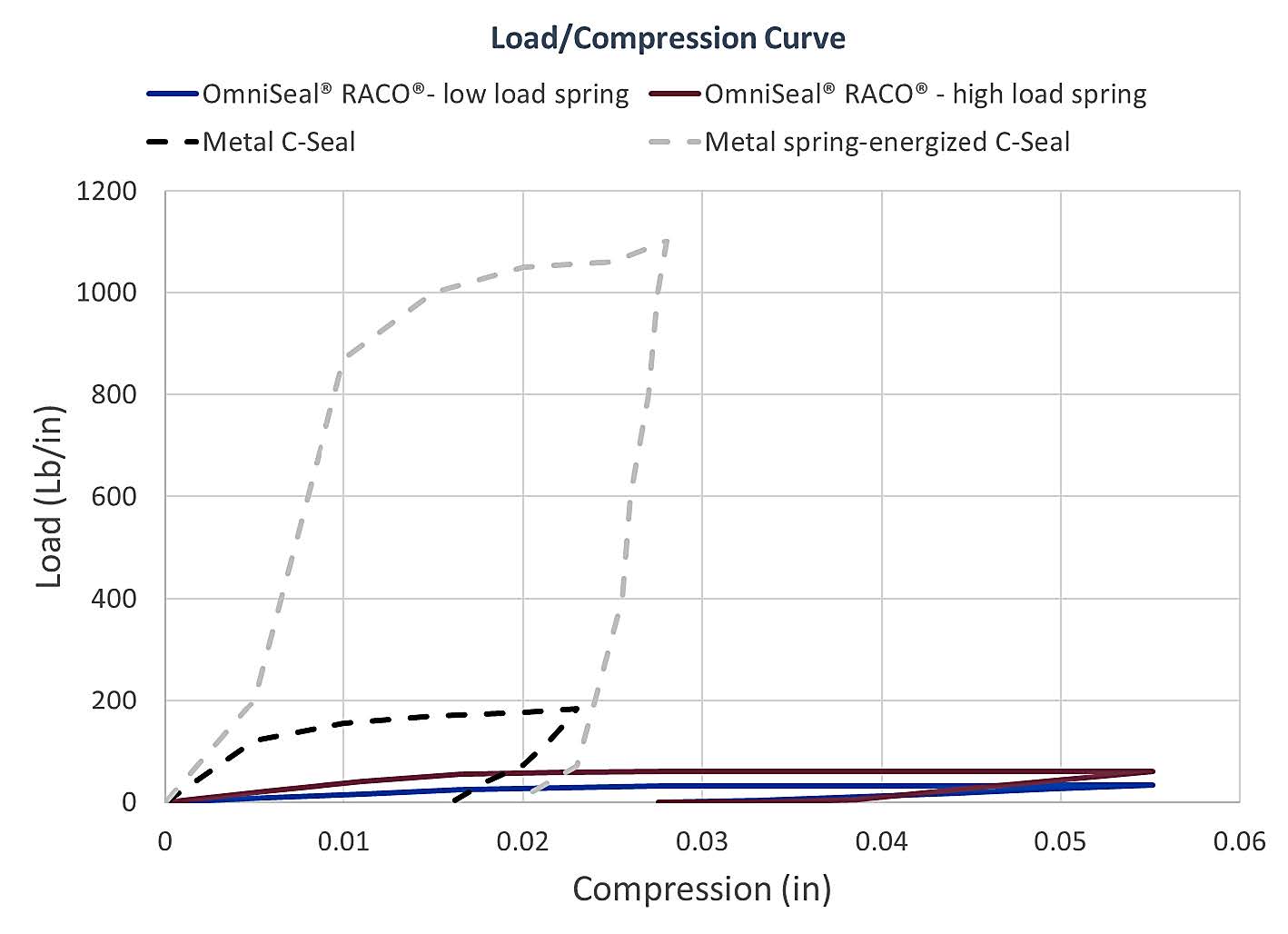 Figure 3: Example of seal load per unit of circumference against seal compression for a seal with 4 mm cross section.The load required for Omniseal® RACO® seals is significantly less, reducing the need for larger and stronger housings.

When only considering bolts, from the equation:

if the compression force is higher, the bolt load on each of the tank door bolts is higher, resulting in the need for larger and stronger bolts and more reliable seals. Figure 4 shows an example of the relationship between bolt weight and seal compression force. 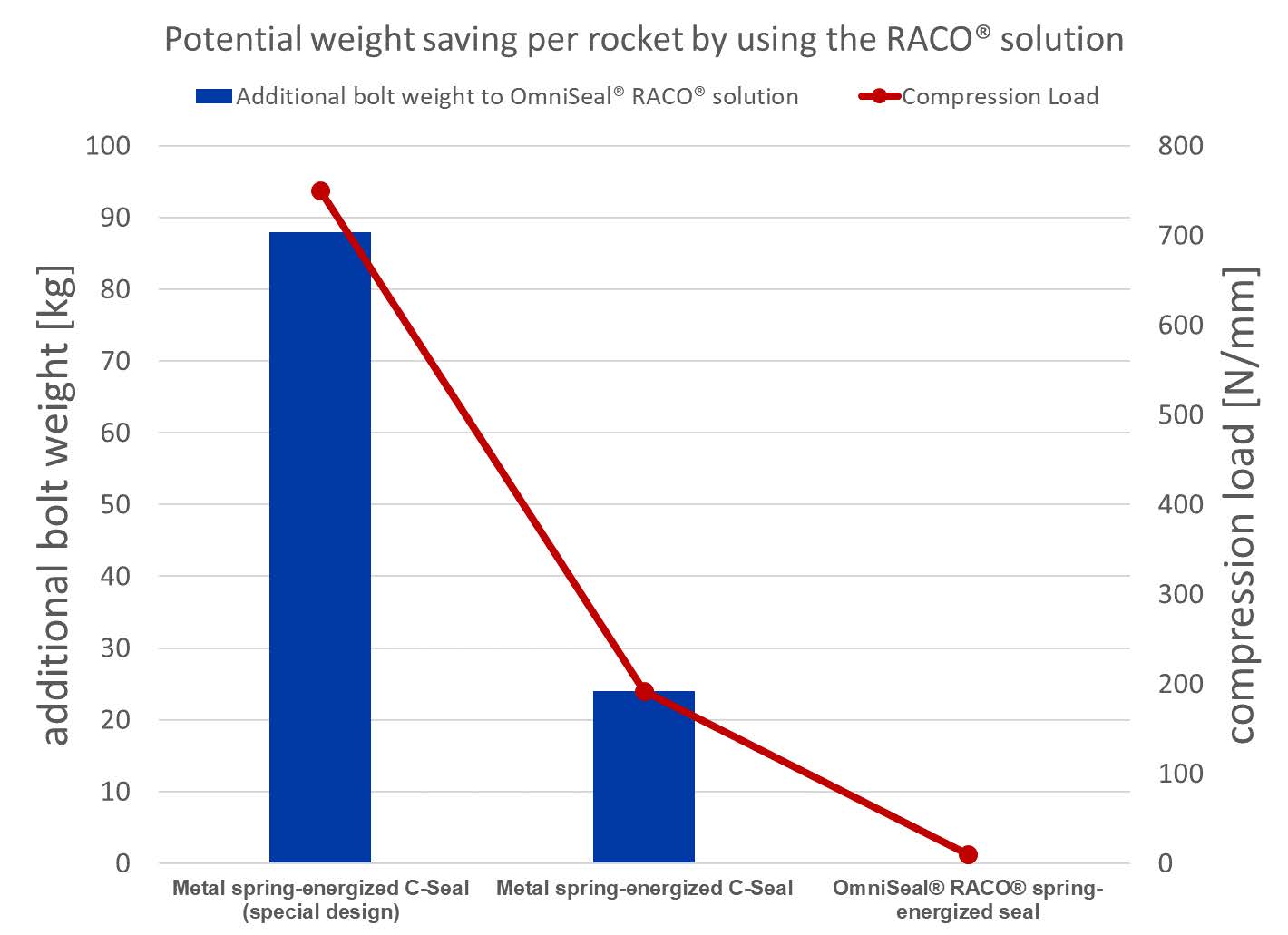 Figure 4: Bolt weight savings with Omniseal® RACO® seal due to decreased compression force requirements (not including potential weight savings of the smaller housings that can be used with lower compressive forces). Total bolt weight is based on a tank seal of 500 mm diameter, 16 bolts per seal, 10 seals per tank, 2 tanks per rocket stage and 2 stages per rocket.

The difference in bolt weight comes from the bolt load requirement for the compressive force in addition to the hydrostatic force and a safety margin.

The relationship between the two factors is clear and the increased weight when using metal seals is significant. Any extra weight on a rocket requires more fuel, which also adds more weight and expense to take off and land.

Deflections caused by excessive vibration can plastically deform metal seals (also known as the spring back force) that the seal relies on to function and where it relaxes, which creates a risk of increased leakage rates. The Omniseal® RACO® solution with the combination of a metal energizing spring and a compliant polymer jacket provides greater spring back after such deflections. This improves the reliability of the seals, which is critical to the future of space exploration with reusable launch rocket technology.

Larger cryogenic tank doors can be built up to 1.9 meters in diameter and are increasing in size. In addition, not all tank doors are circular or elliptical and can have irregular shapes. Omniseal® seals have the advantage of being available up to three meters in diameter and being machined and formed in customized shapes without manufacturing complications. The spring-energized seals are also easier to install versus metal seals because of the amount of torque needed to secure nuts and bolts for the metal seal.

Returning to metal seal and their advantages, this technology has the widest range of temperatures and pressures and thanks to plating, the best chemical compatibility.

In some space applications, temperature can cycle quite significantly. One example occurs when the same seal is in contact with both pre-burnt liquid propellants that are at cryogenic temperatures and post-combustion gases that can reach 1,000° F or more. The same circumstance can happen with pressure where specific types of metal seals such as metal spring-energized seals can handle ultra-high vacuum up to 80,000 psi.

Leakage rates are one of the critical factors in rocket cryogenic applications that use seals, which space manufacturers and design engineers need to go beyond for a successful launch and landing. Other factors should always be considered.

Metal seals such as spring-energized C-Seals can offer the best leakage performances in space cryogenic applications. Additionally, they have the widest ranges of temperature and pressure and the best chemical compatibility.

On the other side of sealing, Omniseal® RACO® seals require much lower compression forces, compared to metal seals, while still meeting precise seal leakage specifications. The benefit in lower compression force, other than easier assembly, is that the installation load on the tank seals is lower, meaning, for example, that smaller bolts can be used, saving weight. Considering the amount of seals on a rocket tank, the difference in individual bolt weight does add up, making the difference in overall rocket weight and ultimately cost.